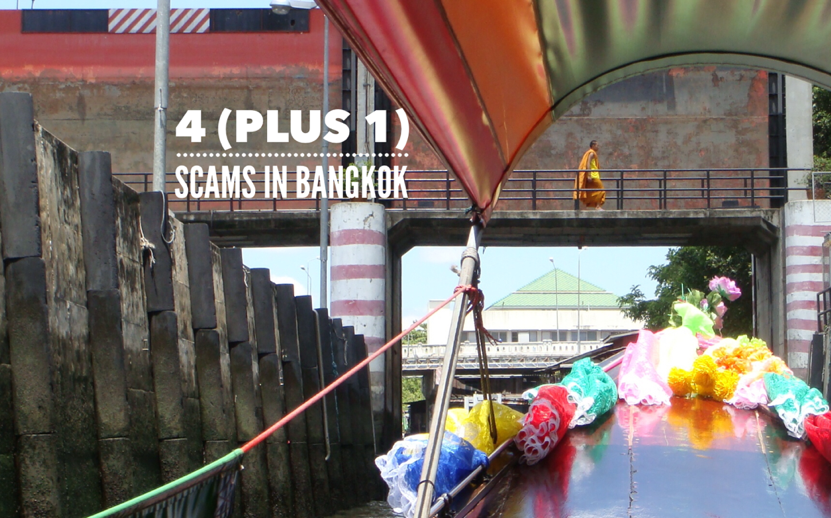 Thailand, especially Bangkok, is one of the most popular travel destinations for its cost and ease of travel. Tourists from all walks of life, backpackers to families, will at one point find their way traveling through famous Bangkok, or the very least, have plans to visit one day in the future.

The truth is though, what most see of Bangkok, is merely the tip of the iceberg. The gorgeously chaotic Southeast Asian metropolis does have a seedy underbelly that, fortunately, most will never be exposed to but definitely does exist. Don’t get me wrong, the biggest city in the Land of Smiles is an amazing place. Whether you’re being sized up as prey by voracious lady boys or facing intimidating bouncers at local sex clubs, Bangkok is a never-ending adventure. However, Bangkok tourist scams can make a good time go south quickly. Generally speaking, most Bangkok tourist scams are just variants of some form of theft ranging from pickpockets to the ingenious long con (think Grand Palace Scam).

As a continuation to our previous 4 Thailand Scams to Avoid, here are 4 more Bangkok tourist scams to be aware of:

One of the most grievous of the Bangkok tourist scams, is the shake downs that occur while partaking in the many theatrical offerings, like a Ping Pong show.  And as wild as that show can be, it’s what potentially can happen afterwards that will leave its indelible mark.

More than one curious tourist has been fleeced upon leaving a bar or strip club by being hit with a 1000 Baht tab from just a couple of Singhas. To top it off, the Bouncers and sometimes even the Manager, will surely accost you until you pay up; and many terrified tourists do, in fact, pay up.

Pickpockets are rampant everywhere, not just Bangkok. But in Bangkok, it’s sometimes the desperate lady boy prostitutes who will work in tandem to relieve the unsuspecting of their wallets.  One will ply all the tricks of their trade to captivate your attention while the other works your pockets. Be wary when approached by more than one individual as one of them, not so surprisingly, will attempt to move out of eyesight.

This is actually a combination of two well-known scams. An incredibly creative and prolific long con, the Grand Palace Scam or Khlong Scam, as it’s now known, involves multiple players over a large distance. Often starting near Khao San road, you’ll first be intercepted by a “friendly” local who’ll recommend The Grand Palace as a great place to visit in order to set you off in the right direction.  Along the way, a few more “friendly” locals will approach you (depending how far off track you’ve wandered) who will claim to be either security, or some type of official, and will regrettably inform you that the Grand Place is closed.  Noticing your obvious disappointment, the helpful local, will invariably suggest a great deal on a floating market tour, one that’s even better than the famous Damnoen Saduak – and all you would have to do is drop his name. To gain further trust, he’ll even negotiate a great Tuk Tuk rate on your behalf, going so far as to having a “heated” exchange with a seemingly “random” Tuk Tuk driver. If you take them up on this offer, prepare to lose a quite a few bahts on an unimaginative boat tour of Bangkok’s canals.

Asia is renowned for their counterfeiting skills. However, the ingenious buggers have evolved their skills beyond just copying the Louis Vuttons and Pradas. On a recent trip through Thailand I saw fake licenses being offered on Khao San Road for PADI certifications, teacher certifications, and even licenses for airline employees. Give these guys a wide berth. If you plan to go diving in Koh Toh with a “Khao San Road certified” dive instructor you may want to brace yourself for a few shattered eardrums.

Bangkok is a fun, entertaining city to visit. Most of the time you won’t have an issue, but just by being aware of some of the seedier elements, you’ll be that much more prepared in the event something does happen. Be a smart, safe and informed traveler and always listen to your gut.

If you do happen to be caught in the web, don’t fret; just consider it the cost of a story you can tell over and over. Without some of the craziness, Bangkok would be pretty bland and lifeless, and who’d like that?

Not really a scam, but interesting nonetheless.

The Ducks Are Hungry

Call it seedy or outright shocking but Bangkok seems to have an inordinate number of eunuchs created at the hands of jilted lovers.  In Thailand, saving face is key. If you’re a Thai woman dealing with a cheating husband for months or years of infidelity, eventually it may be too much to take. Reading local papers over the course of a year reveals way too many of these horror stories.

If a wife has caught her husband cheating she may note this in the face saving way of speaking a Thai phrase, which means: “The ducks are hungry.”  In rural areas of Northern Thailand ducks are plentiful and from past horrors, ducks seem to be fond of male genitalia tossed out of the window.  Either she follows up on the threat or the husband gets the hint.

What Bangkok tourist scams have you seen and can add to the list?