The Trouble With visiting Istanbul – 3 days is Not Enough! 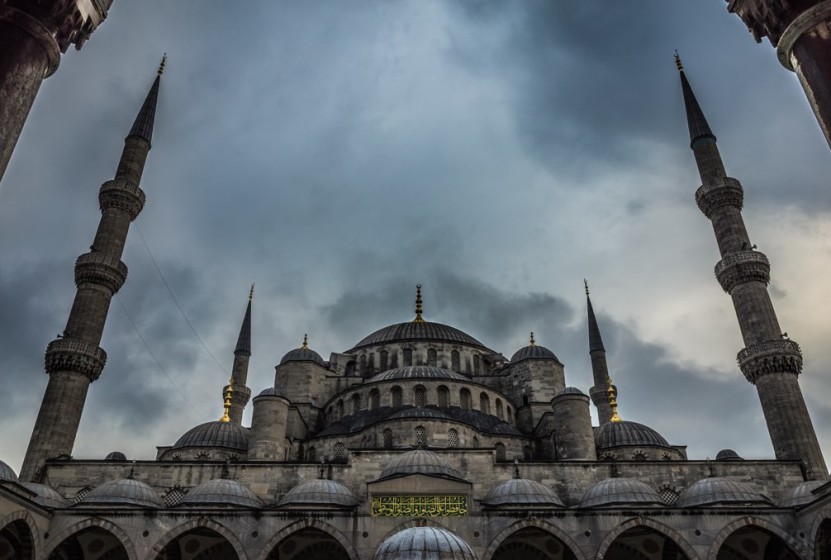 Above Image courtesy of Giuseppe Milo

No one will hold it against you if you thought Istanbul was the capital of Turkey (I know I did – it’s actually Ankara). This sprawling economic metropolis spans across both Europe and Asia with a cityscape chock-full of Byzantium and Ottoman era architecture.

This sprawling economic metropolis spans across both Europe and Asia with a cityscape chock-full of Byzantium and Ottoman era architecture. A city of immaculate contrasts: A juxtaposition of Old World and New World architecture with both European and Asian influences.

When my wife and I first arrived, we immediately noticed a city of immaculate contrasts: A juxtaposition of Old World and New World architecture with both European and Asian influences. We saw trams chugging along past 15th century bazaars; we saw modern fixtures, like ATMs and restaurants, sitting side by side with Mosques and Palaces.

As we checked into our hostel in the Sultanahmet district, we knew immediately that we were in trouble! Istanbul is a menagerie of sights, restaurants, shopping and experiences and three days was not nearly enough time!

But with a fistful of Lira (ATMS are very accessible) we sure as hell were going to try.

For those with limited time like my wife and I, Sultanahmet, on the Eminonu side, is a great starting point which itself is a Unesco World Heritage site. In addition to having accommodations for all budgets, Sultanahmet is also central to a number of popular sights all within walking distance. The Old City is street after street of architectural treasures and you can easily wander aimlessly amongst the old buildings and alleyways.

Here are some of the things we enjoyed while visiting Istanbul, and hopefully you will too:

Located on the edge of the Sultanahmet district, the Blue Mosque is an absolute must for anyone traveling to Istanbul. It’s also hard to ignore considering you can pretty much see its giant dome and 6 minarets jutting into the sky from any point in the city. We tried to hit this early in the morning, after the first prayer service, but were surprised that a few hundred other people had the same idea! Still, bear the line and you won’t be disappointed. The interior is equally as grand as the exterior (try to count the windows). The females are provided a shawl to cover their hair and shoulders, if needed. 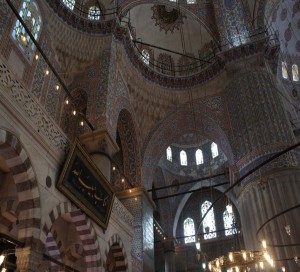 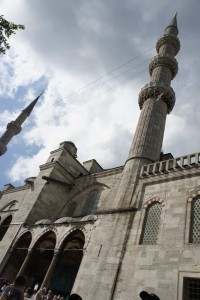 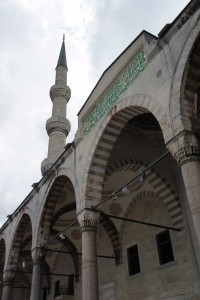 Right across from the Blue Mosque is Hagia Sofia, a much older and equally as impressive structure. Now converted to a museum, we were ecstatic to be able to indulge our inquisitive need to explore. First thing we noticed is how richly ornate the interior is; large imperial doors, numerous arched openings, and gorgeous mosaics. There’s also an accessible upper level that provides a great vantage point for the whole room. We really enjoyed Ayasofya, as it didn’t feel rushed and we were able to take our time to enjoy all the little details. 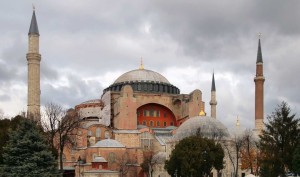 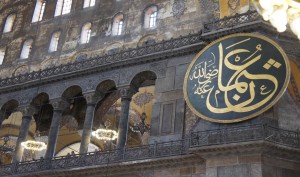 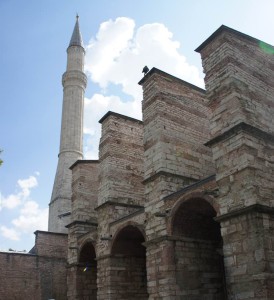 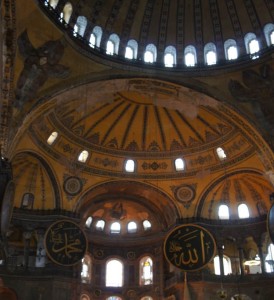 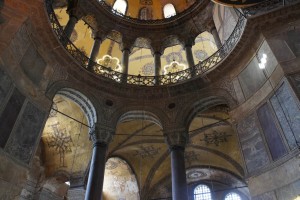 Kapaliçarşi aka The Grand Bazaar

No trip is complete without some shopping (according to my wife anyways). One of the oldest, and largest covered markets, The Grand Bazaar is a cacophony of sights and sounds. I honestly can’t remember all the details; I think we spent more time trying to find our way back from where we came. Although we did end up seeing the same shops street by street and it does get overwhelming at times, the Bazaar is a fun and fascinating place to observe a part of Istanbul’s history. If you’re not careful, you can burn hours away here. 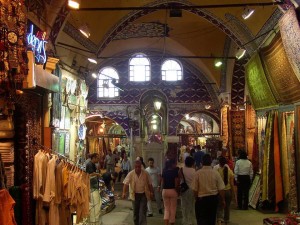 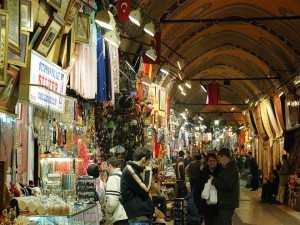 For those whom need another induction into Istanbul, the Spice Bazaar won’t disappoint. Not nearly as large as its more famous cousin, the Spice Bazaar still has its charms. With stalls filled with colorful spices and all things Turkish, the bazaar epitomizes the romanticism of Istanbul.  We did notice that there were more locals here and that everyday items, like groceries, could also be purchased. 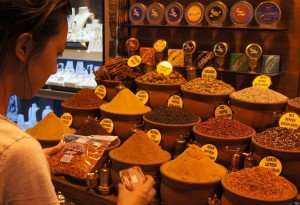 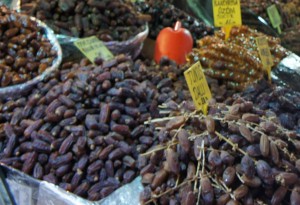 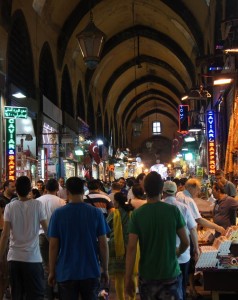 A massive Ottoman palace on the eastern peninsula of where the Golden horn begins, Topkapi Palace is well worth at least 4 hours. Just walk east from the Sultanahmet and you can’t miss it (it’s actually right behind AyaSofya). No matter what time you go, you’ll probably have to wait in line. We arrived at 9am, and still waited about 30 minutes for ticketing. Also worth mentioning, there are 3 museums, each requiring their separate passes: the main palace (30 TL museum), the Harem ( 15 TL), and Hagia Irene (20 TL). We were on a budget, so we decided to pass on Hagia Irene.

Some of the exhibits also have a dress code prohibiting shorts, and exposed shoulders. I usually bring convertible pants, while my wife carries a travel scarf, so fortunately we were prepared. They do provide coverings in case you forget – so you won’t have to make that long walk back down the hill. 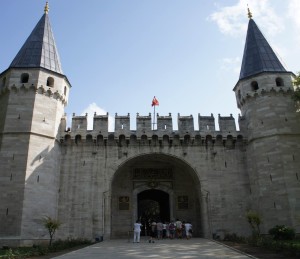 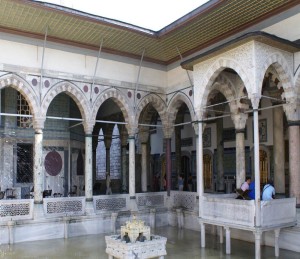 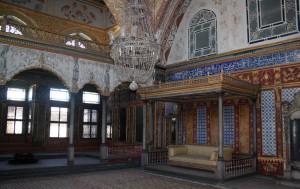 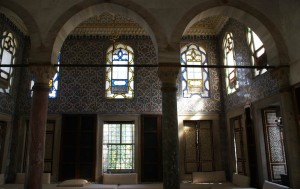 Amidst all the other high-profile sites like the Blue Mosque and AyaSofya, it’s really easy to overlook the Cistern. Word of advice…go see it! It’s absolutely a worthwhile stop on the way to the Grand Bazaar or even after AyaSofya. This place is awesome and we almost missed it! I literally led us in circles for a good 20 minutes and even had to break for lunch! The entrance is quite nondescript resembling a gendarmerie station and certainly belies what’s underneath. First thing you’ll notice as you enter this underground temple is how immense the chamber is, the second thing you’ll notice are the rows and rows of colonnades. The line and crowds are reasonable (I think we waited maybe 10 minutes) so you can easily make it a quick detour. 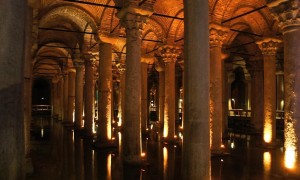 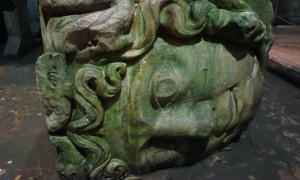 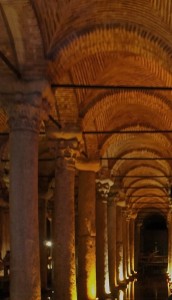 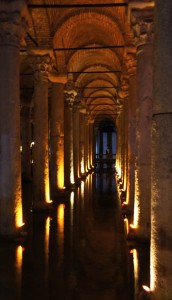 Coming from Sultanahmet, we felt as though we’ve been transported through time. With western trappings, like McDonalds and the Ritz –Carlton, it was easy for us to forget our mosque-raiding from the day before. Taksim Square is incredibly easy to get to. Virtually all the public transport systems have a transfer point there. We took the tram from Sultanahmet to Kabastas, and then shot up on the Funicular to Taksim. Sadly, we didn’t spend too much time here, as we were passing through to Istiklâl Caddesi and beyond. But we did need to make a pit stop for a Kizilkayalar wetburger! 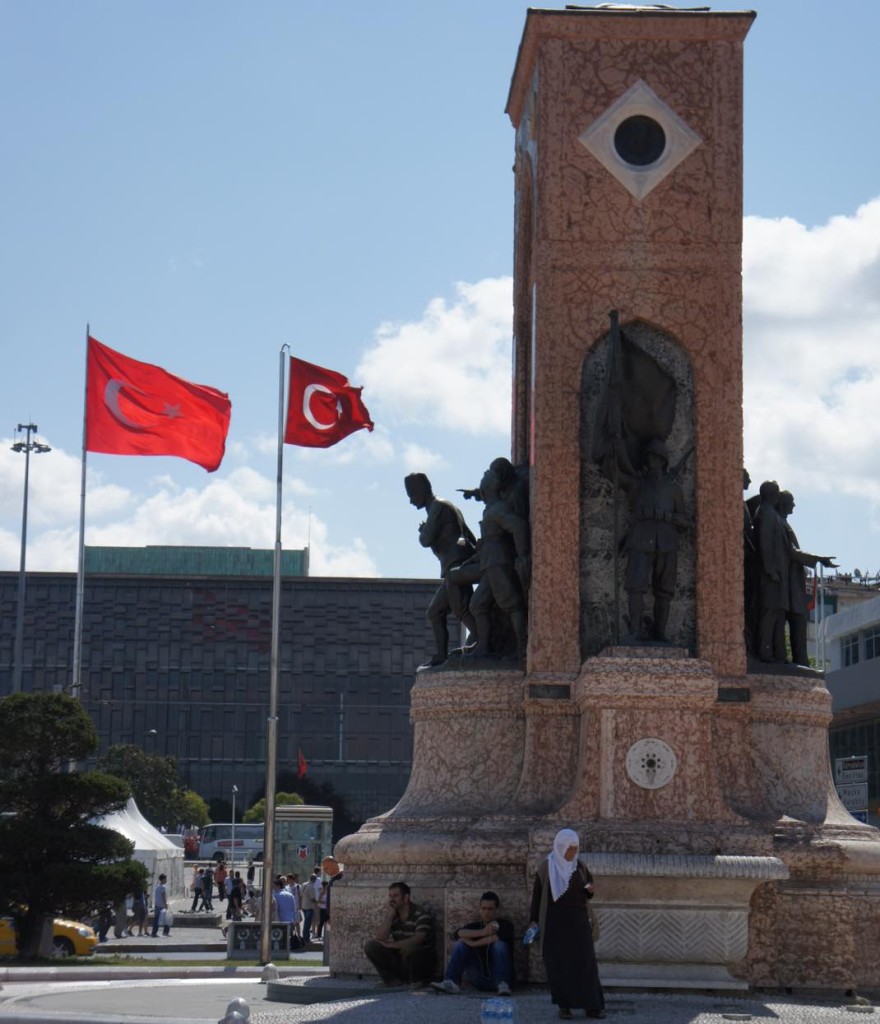 This should be an entry in my Istanbul food blog, but because I personally enjoyed the “wet burger” so much, it warranted a place on my must-do list. Specifically the Kizilkayalar wet burger. First impressions, I ain’t gunna lie, I was a bit scared when I approached the cloudy steamy burger sauna and saw sweaty, pre-made moisture-logged buns stacked to the brim. Finally coming to grips with my perception of what a burger should be, I mustered the courage to try one. And I am so glad I did! The texture was as expected, but the tomato broth soaked buns were a pleasant surprise. There wasn’t much in the sense of meat, but a thin disproportioned patty. However, I could almost presume this was purposeful to keep the meat from overpowering the flavor of the buns. But I digress. Long story short, try one when you get chance! Read more at my food blog. 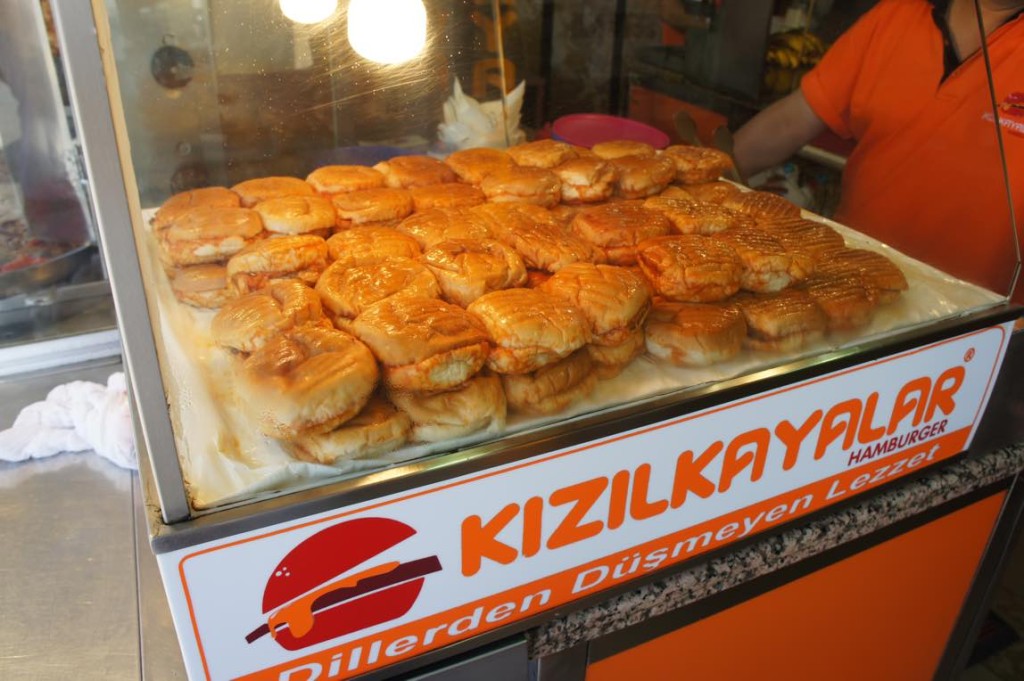 Probably the most famous pedestrian street in Istanbul, we found Istiklâl Caddesi to be an intoxicating afternoon walk that we thoroughly enjoyed. A hodgepodge of architectural styles from the 19th century to more recent days, the buildings corral the street creating a veritable tunnel of designer clothing stores, and baklava pastry shops. Within the not-so-secret alleyways you’ll even find pubs and rooftop Nargile (hookah) cafes to whittle away the hot afternoon sun – just like we did! Normally I wouldn’t suggest a shopping strip as a must-do, but Istiklâl Caddesi is pretty iconic for the Beyoğlu side of Istanbul. You’ll have fun, or the very least come out the end a few pounds heavier from the Turkish delights.

The best way to approach Istiklâl is to start from Taksim square and head towards Galata Tower and Sultanahmet. It’ll save you from having to double back after a long day of walking. 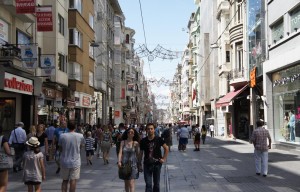 Whether you call it Hookah, Shisha, or Nargile, for us it was hands down one of the fondest memories of Istanbul that we have. In need of rest and respite from the afternoon sun, we literally stumbled upon Kallavi Nargile Cafe. Located on the 3rd or 4th floor, Kallavi has a welcoming outdoor terrace to drink cay (Turkish tea, pronounced Chai) and people watch. What made our experience particularly memorable was the opportunity to hang out with the locals playing checkers all while puffing on our apple flavored tobacco. Tobacco offerings are probably similar elsewhere, but I can’t speak enough praises about the venue, and the overall experience.

I think I’m doing something wrong… 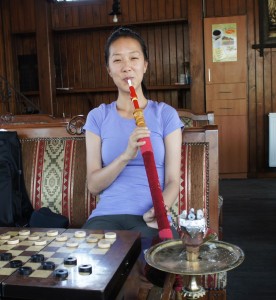 My wife enjoying a bit too much

A few streets away from the southern end of Istiklâl Caddesi, and heading towards the Karakoy tram stop, is Galata Tower. It’s difficult to miss the stone tower as it looms over most of the surrounding buildings. Sadly we did not go up the tower and in retrospect we wish we had, as we’ve heard amazing things about the view. Still, if you don’t go up like us, the witch-hat styled roof and position of the Tower is a visually imposing structure worth it’s own set of photos. 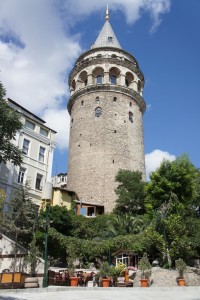 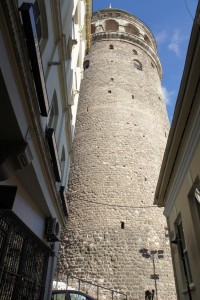 I know this is only scratching the surface of what Istanbul represents, and I’m so far from doing it any justice. Istanbul is an amazing destination, and it would be impossible for me to discover all its secrets and personality in only 3 days.

Good news though, it gives my wife and I another reason to go back.

2 Responses to The Trouble With visiting Istanbul – 3 days is Not Enough!