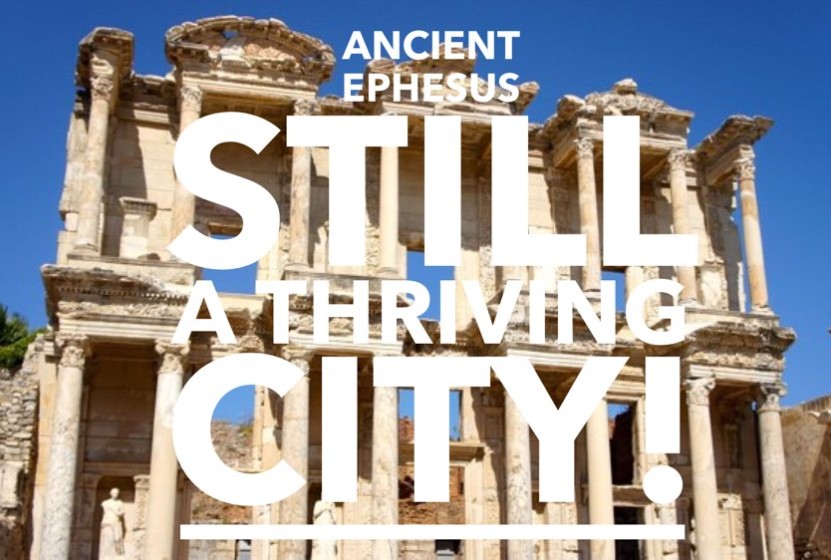 The ancient city of Ephesus Turkey was alive. Curetes way teemed with the footsteps of thousands, drowned out only by the cacophony of countless voices. The crowds pervaded every corner, leaving not a single alley or stone undiscovered. But where once the hustle was the call of merchants hawking wares, or prophets divining from pulpits, the streets of Ephesus was now replaced by the clamoring and jostling of those looking for the perfect photograph; Togas replaced by T-shirts, and sandals…well, that remains the same.

It’s no wonder that ancient Ephesus, like ancient times, still remains so popular. Like the metropolis that once stood there, Ephesus Turkey is once again the darling of the Aegean.   Albeit for different reasons. 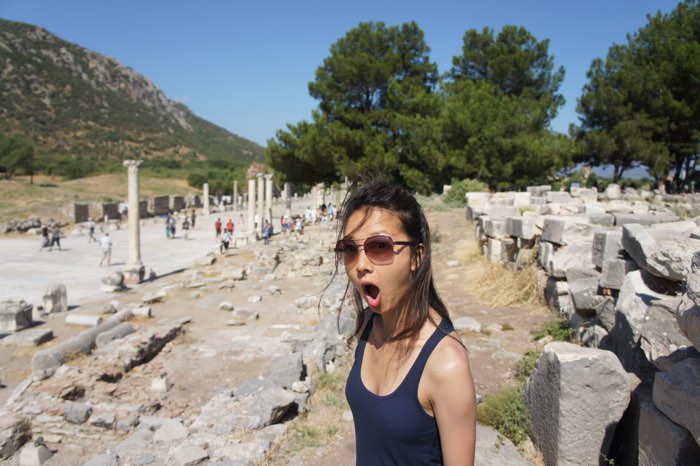 Located along the Aegean, and a stones throw from Selcuk, Ephesus was once an epicenter for commercial Roman and Greek Asia. Now, it enjoys fame as one of the best preserved ruins in all the Mediterranean- and in Turkey, this is no easy task. The caretakers have painstakingly restored Ephesus to allow an immersion unlike many ruins that exist in the Mediterranean, and possibly all of Europe. In Hierapolis Pammukale where sections seem compartmentalize, Ephesus draws you in as you walk the stone streets, making it easy to envision what it must have been like as a citizen of the Roman Empire in 129 BC.

Ephesus even boasts as the location for one of the great seven wonders of the ancient world – the Temple of Artemis. Although this has since fallen into disrepair, Ephesus is a stop that many, especially first time visitors to Turkey, must visit.

Yep, this is all that remains of the Temple of Artemis

And visit they do. It’s popularity, and just the overall quality of this site, will invariably be a huge draw for crowds. Although few opportunities exist for the perfect photo-op (You could always try our photography trick that eliminates tourist), don’t let this dissuade you from including Ephesus on your itinerary. Ephesus, isn’t an exercise for the imagination; it’s a full immersion into the life and times of the Greco-Roman periods.

I’m not an expert of the region by any stretch of the imagination, having visited only once.  For more detail on the area and Turkey in general, I highly recommend reading the Turkishtravelblog.com. Natalie is an expert in all things Turkish and has written and put together some amazing information.

Ephesus Turkey Things to Do and See:

Even though a search online will result in a plethora of websites listing all the popular attractions, I still need to add my voice to the masses! And honestly, you can never have enough photos or suggestions.  This list can literally go on forever, as Ephesus is a potpourri of ancient treasures to the point where it’s almost unfair to the rest of Turkey:

Library of Celsus – the most familiar of all Ephesus structures and the poster child for Turkey tourism, all that remains is the façade. Impressive nonetheless.

Great Theatre – With a capacity to seat 25,000 spectators,  the theatre was the main venue for plays, concerts, gladiator battles and even animal fights. 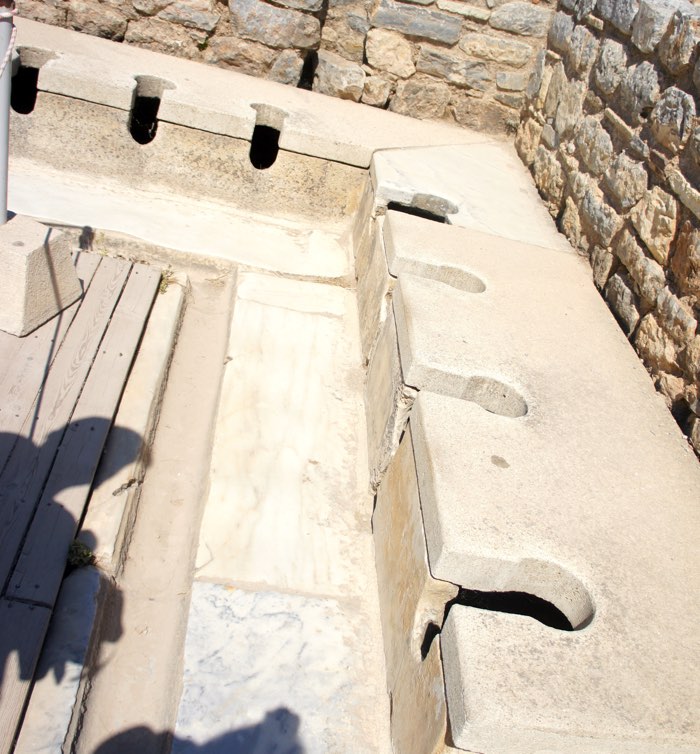 Baths of Varius – Still in a state of excavation,  the bathhouses was the place of bathing for citizens, and possibly even used as a gymnasium later on. 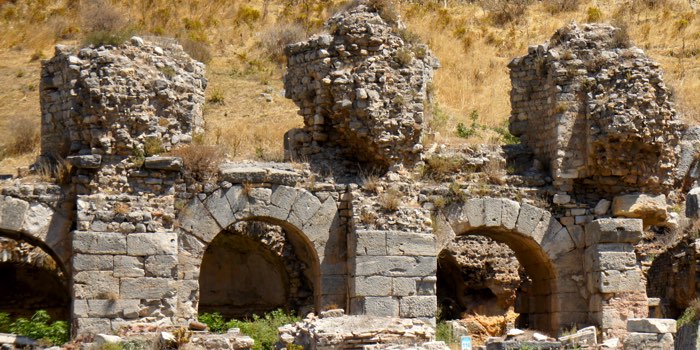 Fountain of Pollio – A vanity project built by the rich Pollio family of Ephesus,  it served as a free public water source to residents and visitors of the city. 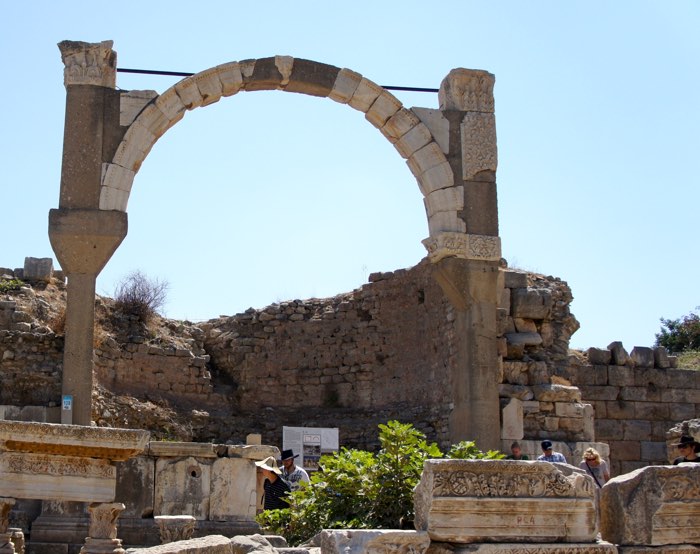 Temple of Hadrian – Built somewhere around 138 AD as a dedication to the Emperor Hadrian,  what remains is an amazing structure with incredibly intricate friezes.

Bouleuterion or Odeon - A miniature version of the Great Theatre,  the Odeon was used as a smaller venue for concerts and performances as well as a meeting place for the Senate or Boulea, hence its other name Bouleuterion.

State Agora – An assembly area where the movers and shakers of Ephesus gathered to conduct business and government affairs. 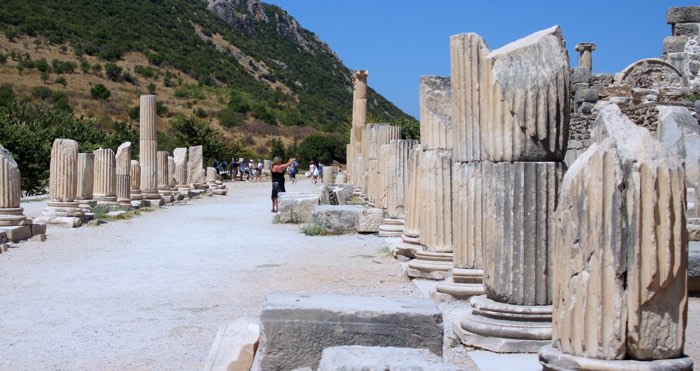 Fountain of Trajan – Built in 104 AD in Honor of Emperor Trajan, it was once the most impressive structure in Ephesus with a fountain surrounded by columns and statues of Dionysus, Satyr, and Aphrodite. 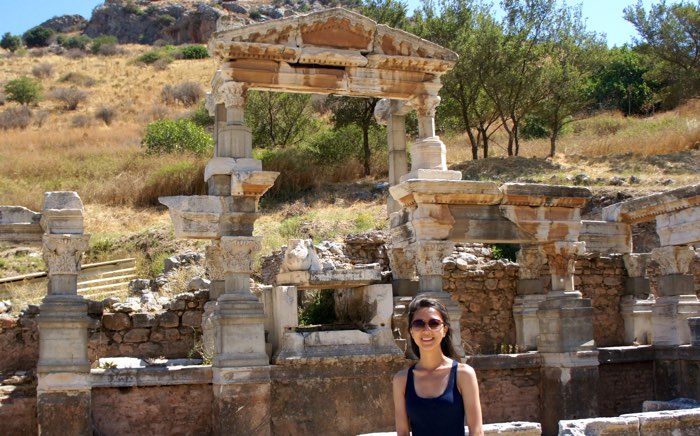 How to visit Ephesus

With buses and dolmuses crisscrossing all across Turkey, no destination is unreachable no matter where you might be.   For those coming from Istanbul, Ephesus can be reached directly by 10 hours on bus, giving you a chance to put some entertaining road trip activities to use.   If you do decide to come direct from Istanbul, take the opportunity to stop in Izmir, which will break up the road trip a bit.

The other option, which we took, is by way of Cappadocia. Take a night bus from Istanbul to Cappadocia first, and come back to Selcuk through Pamukkale or Denizli.

Where to Stay in Ephesus:

Selcuk is probably the best place to set up your base hub, and, as I mentioned earlier, is just a stones throw away. You also have the option of staying in Kusadasi, which is a little further south. Personally I suggest Selcuk as a great preamble to the main course as you can visit the Ephesus Museum, the Basilica of St. John, Isa Bey Camii and the less impressive Temple of Artemis (pictured above). Selcuk also has some pretty spot on Food and hostel options. 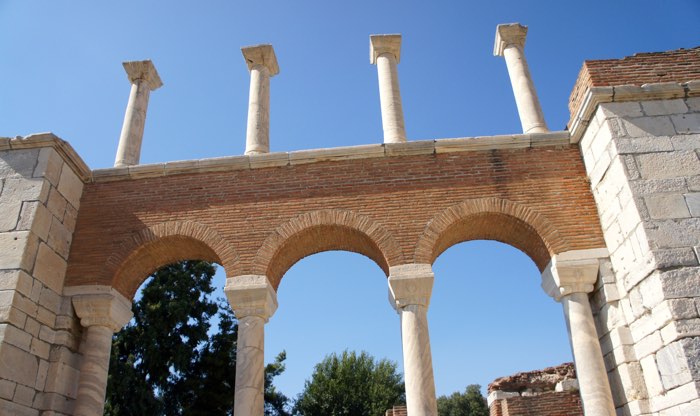 From Selcuk, taxis to Ephesus run about TL 15, and from Kusadasi just hop on a minibus for about TL 4 and walk about 20 minutes to the ticket office from where they drop you off.

Naturally the summer will be the busiest and most crowded. But Turkey is pretty much always busy since it is a hot spot for travelers after all. However, even during the height of summer, there are times in the day that are more conducive to visiting Ephesus. The general consensus is either early morning right when they open to avoid the large cruise ship tours coming in from Kusadasi, or after 4pm when the tours are leaving.

There is no wrong way to approach Ephesus Turkey, and however you decide to visit, you will not be disappointed.  The only real down side is the never-ending sea of tourists, but if anything, it’s indicative of how awesome this ancient city is – it really is worth it!

The Trouble With Visiting Istanbul

How to Find Adventure in Cappadocia

One day is all you need for Pamukkale

The Road To Nowhere – Cappadocia to Pamukkale

One Response to Ancient Ephesus Turkey, Still Alive and Thriving!