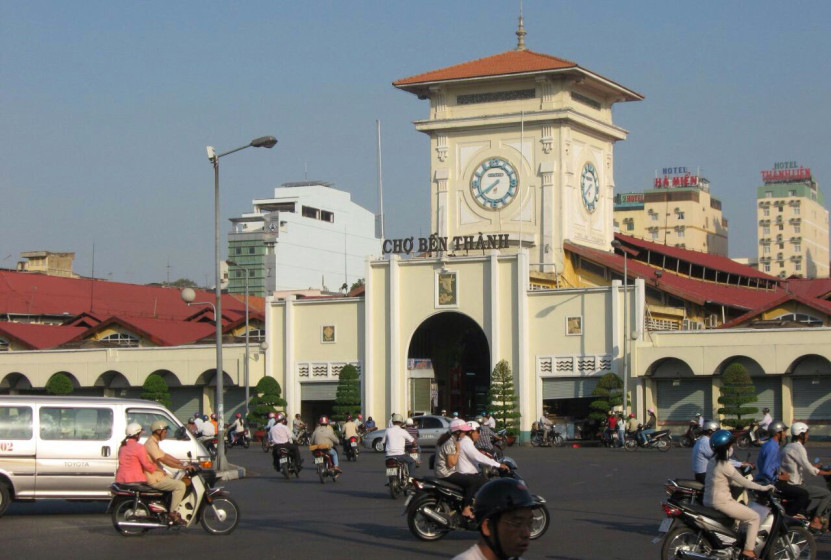 It had been 12 years since my last visit to Saigon Vietnam. Needless to say I was thrilled and giddy with excitement to see my family, devour all the fruits, desserts, and Vietnamese cuisine that was on my long list of Things I must eat while in Saigon, and I was very much looking forward to finally introducing Mike to my cousins, aunts, and uncles!

My auntie spoiled me by making one of my favourite meals – Banh Canh (Vietnamese udon). Topping things off with a nice cool coconut!

With family in Saigon and the ability to speak passable Vinglish (a mixture of Vietnamese and English words with a lot of “cai ai”, which means “the thing”, thrown in when I don’t know the proper word for what I’m describing) in my heavy Canadian accent, I am fortunate to be able to experience Saigon in a completely different way. The moment Mike and I stepped off the plane at Tan Son Nhat International Airport my cousin, who unlike me is fluent in Vietnamese, escorted us through customs with absolutely no problems. We did get a lot of stares from those waiting in line to get their Visas approved (Mike and I had applied for our Visas in Canada, so we would have skipped that step), as well as those who were being questioned by the Customs Officers. Once our luggage finally arrived (we were waiting so long for my bag that I was scared it was still somewhere in Vancouver), my uncles had a cab waiting to take us to our Bed and Breakfast, which was in the Backpackers District (more on that later).   Luckily for us, the nerves that some travelers get when first arriving in a foreign country were not there because my cousin and uncles were with us. They knew exactly where to go and made sure we were properly settled before taking off. Also, we didn’t even have to worry about going through the troubles of getting Vietnamese Dongs because all of that had been arranged beforehand and my uncle just handed over a wad of cash and we became instant millionaires (well in Dong currency that is).

It was about 2:00 a.m. when we finally settled in and both Mike and I were exhausted after more than a day of traveling, so the first thing Mike did was raid the mini bar. Normally, we would leave the mini bar alone and just go out and buy our own beer but at 20,000 Dongs for a can of Heineken (that is approximately $1 CDN), I told Mike to have at it.

The next day, after Mike enjoyed his first real Vietnamese breakfast and authentic Vietnamese coffee (café sua da – YUM), my uncles picked us up to take us to my grandpa’s house (where my dad was born and grew up), so I could pay my respects. I know that anyone who has traveled to Vietnam will have seen all the scooters and mopeds whizzing around, but whether they have ever driven one, or ridden on the back of one, is a completely different story. Mopeds are the main form of transportation in Vietnam. It is not uncommon to see a family of four on a moped or even someone move a couch on one – it is completely foreign to us, especially when the only system we know is one that requires us to buckle up and refrain from using electronics or doing anything that will “distract” us from driving (I can’t imagine a bigger distraction than trying to balance a couch on the back of your scooter, while at the same time moving through a heavily congested road) – but this is the only system that Vietnamese people know and it works for their lifestyle. 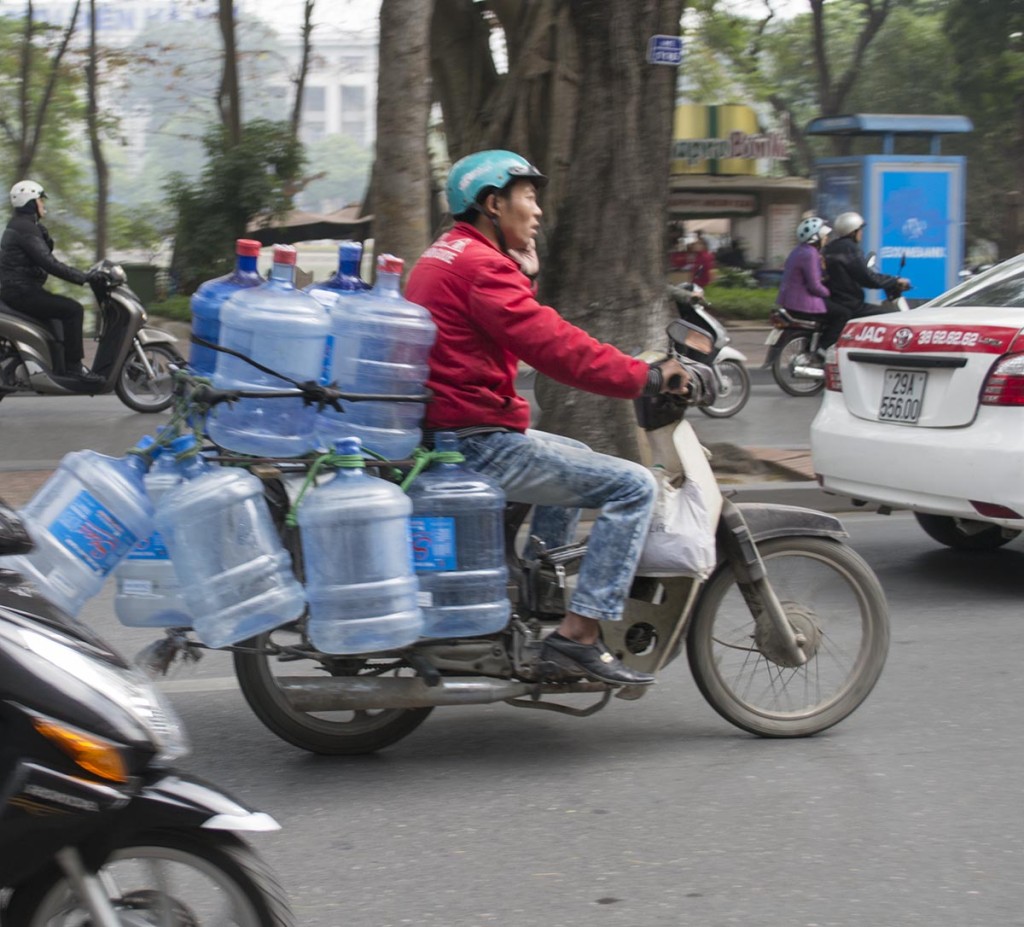 Taking distracted driving to a whole new level! Although this picture was taken in Hanoi, Vietnam, this was a common scene in Saigon.

Armed with extra helmets, my uncles passed them to us and I immediately jumped on. Mike, on the other hand, hesitated and asked me whether this was a good idea. I had never driven a moped, but had ridden on one numerous times so this was an experience that I was familiar with. I completely understood Mike’s fear (the best way to describe the traffic in Vietnam is organized chaos), so I told him to put on his helmet, hold on to my uncle and “trust in the driver”. After a while, Mike was able to relax a little bit but I don’t think he was ever able to enjoy the ride. For some reason, he was more comfortable crossing the streets of Saigon than sitting on the back of a moped.After the first few times Mike quickly learned that when crossing the street, look straight ahead and keep on going – do not hesitate and do not make any unexpected moves or else you will throw off the whole system. You don’t have to worry about dodging the drivers, they will get out of your way.

This is Mike doing the Saigon Street Shuffle: 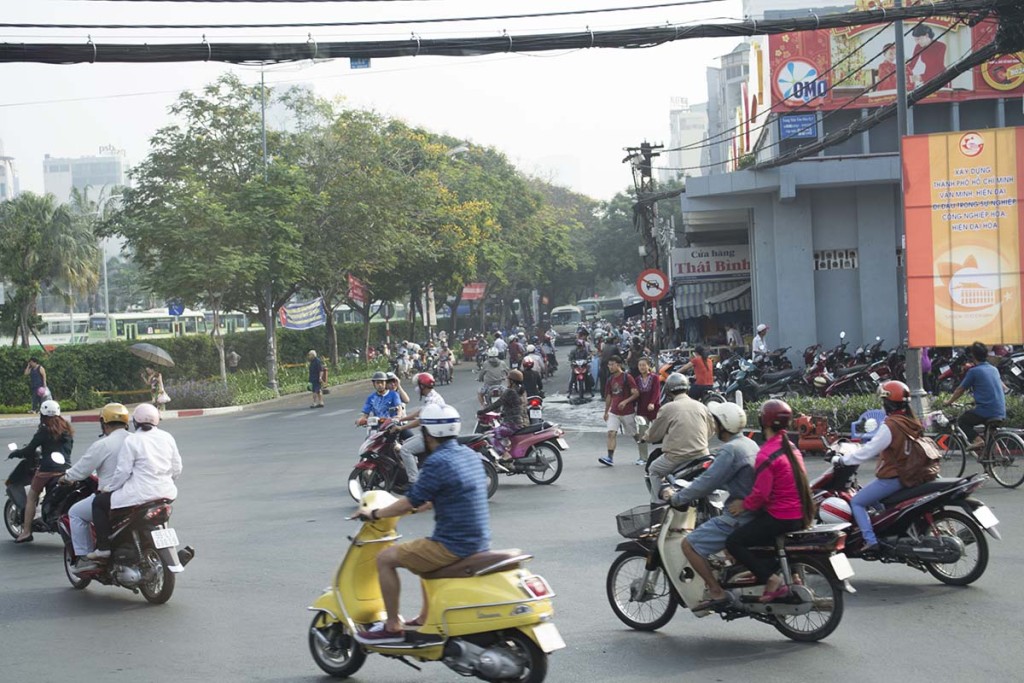 Brings a new meaning to “sharing the road”. Both pedestrians and drivers have the right of way.

Despite not speaking the same language, Mike got along extremely well with my uncles. It was great to hear my uncles cracking jokes, even though they were at Mike’s expense. I was telling my uncles how much I was paying for certain things and not surprisingly it was more than what the locals paid. My uncle Tam told me it’s because I have the “white guy” with me and so everything will instantly cost at least twice as much. That comment was immediately followed with a hearty chuckle and became an inside joke between Mike and uncle Tam. From the start my whole family liked Mike and told me how lucky I was to have such a kind and tall husband (Vietnamese people are not very tall, so anyone over 5 feet 8 inches is considered tall). They doted on him, asking what his favorite Vietnamese meals were so they could prepare it, and my cousin Trang always made sure to have an abundance of beer in the fridge just for him. The best thing about this trip to Saigon, besides sharing it with my husband, is I got to spend a lot of time with my family and get to know my uncles better. 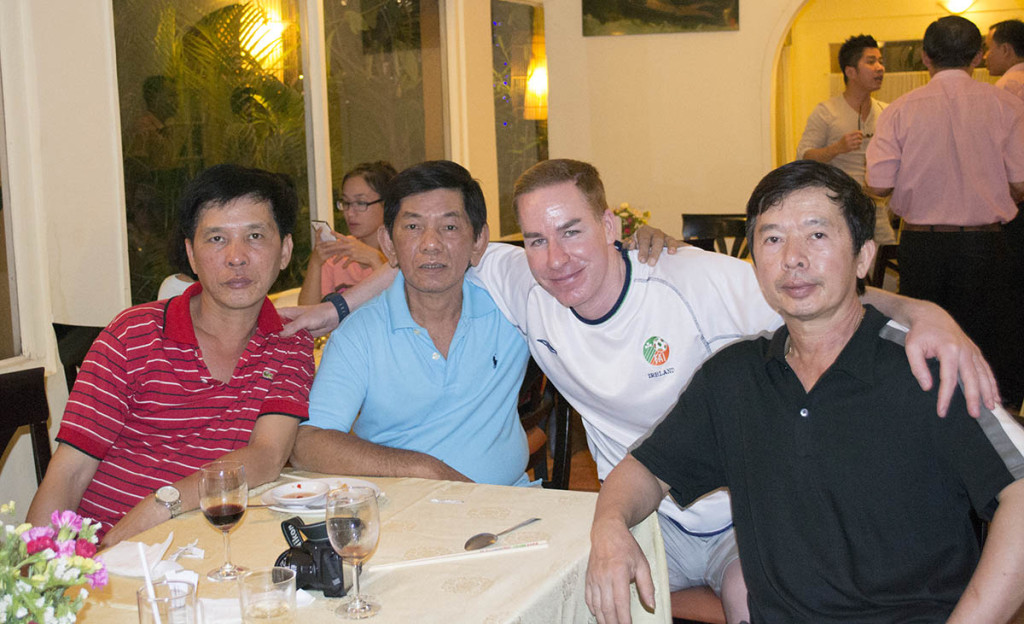 Mike and the three Musketeers during a family dinner. 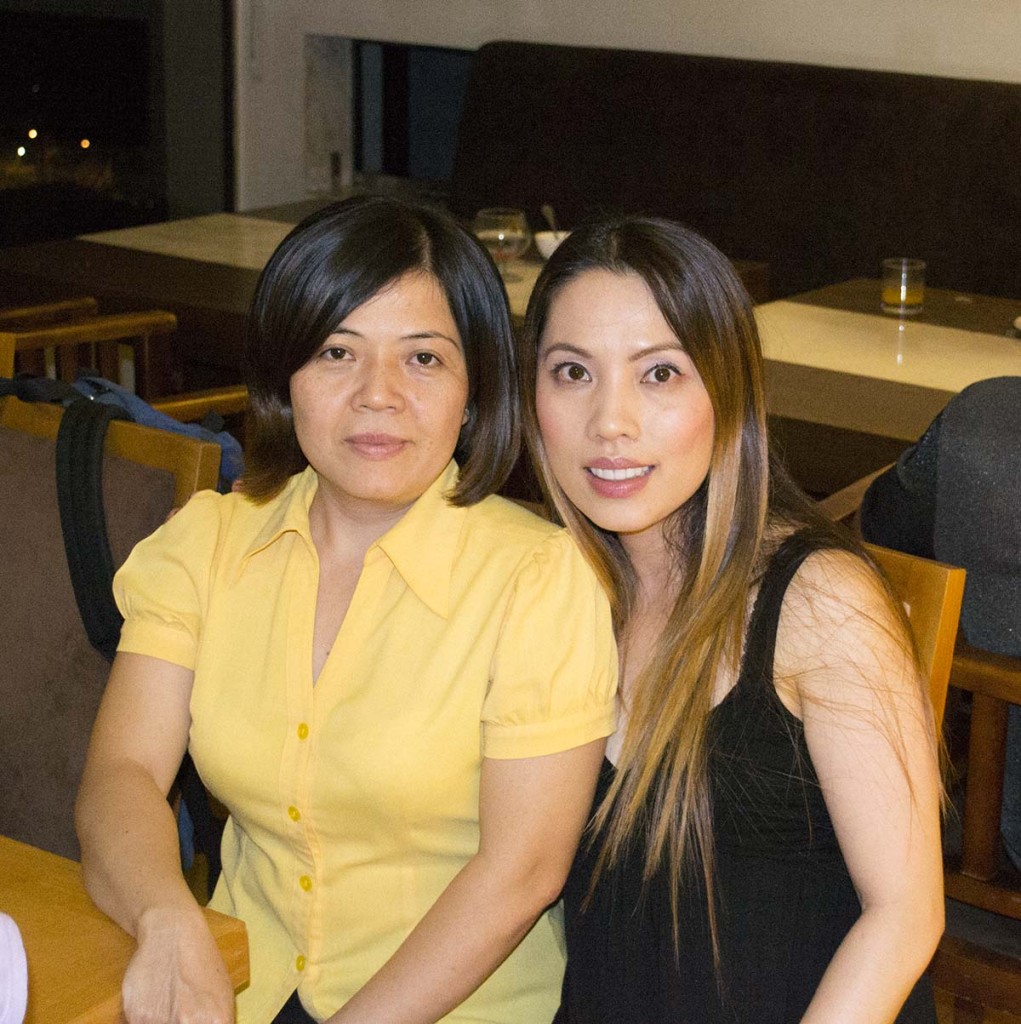 My cousin Trang and I. She’s absolutely amazing!

I got to meet this cutie patootie named Bean, who was always hamming it up and never shying away from attention.

Mike and I stayed on Phạm Ngũ Lão Street, also known as the Backpacker’s District, which is a lively and safe area with lots to do, good places to eat, and plenty of other tourists so you can meet people from all over the world. The first bed and breakfast we stayed at met our needs perfectly, the location was great and the staff were friendly, but after my dad (who met us in Saigon) and uncles found out how much we were paying per night (which was not that much, especially when compared to what we would pay for similar rooms in different countries), they organized a quick exit for us. Fortunately they found another hotel for us, which was also located in the Backpacker’s District, and $12 less than what we were paying. Neither Mike nor I really wanted to leave because it was a hassle to pack up just for one night (we were flying out to Nha Trang the next), but the three musketeers made such a ruckus there was no way we could stay (Mike and I still joke about this). That’s the thing about family – it really is hard to tell them no. LOL. I would definitely recommend finding a place on Phạm Ngũ Lão Street.

An alley in the Backpacker District of Saigon.

I know not everyone is fortunate to have friends or family in Saigon, and so here are some things you should know that will make your trip that more comfortable:

How ice is transported in Saigon. 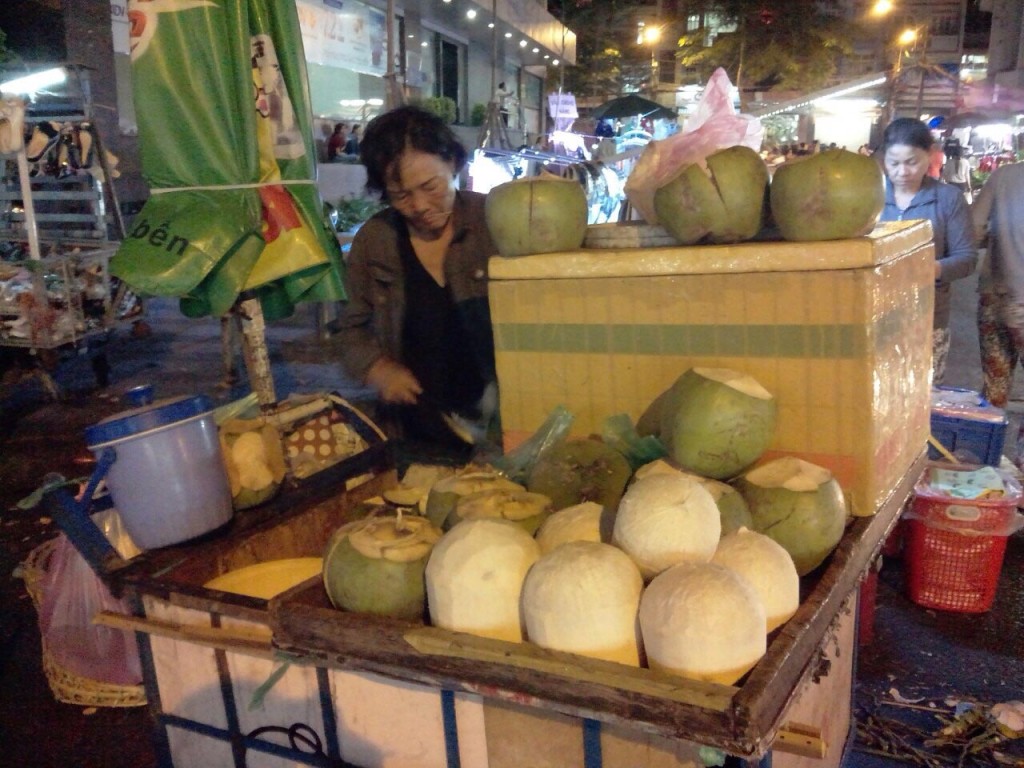 Coconut vendors are a common sight in Saigon. 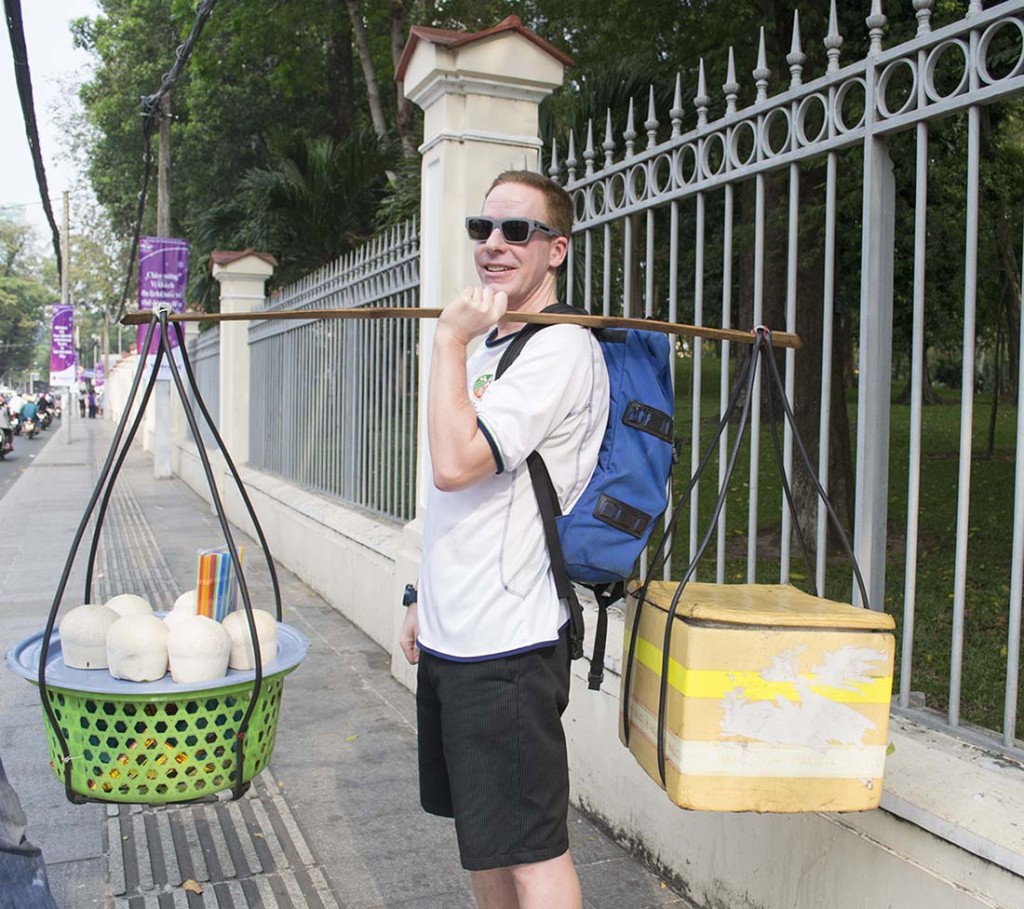 Mike wanted to try his hand at selling coconuts.

Want to know what to do during your visit to Saigon Vietnam? Read my next article for some suggestions.