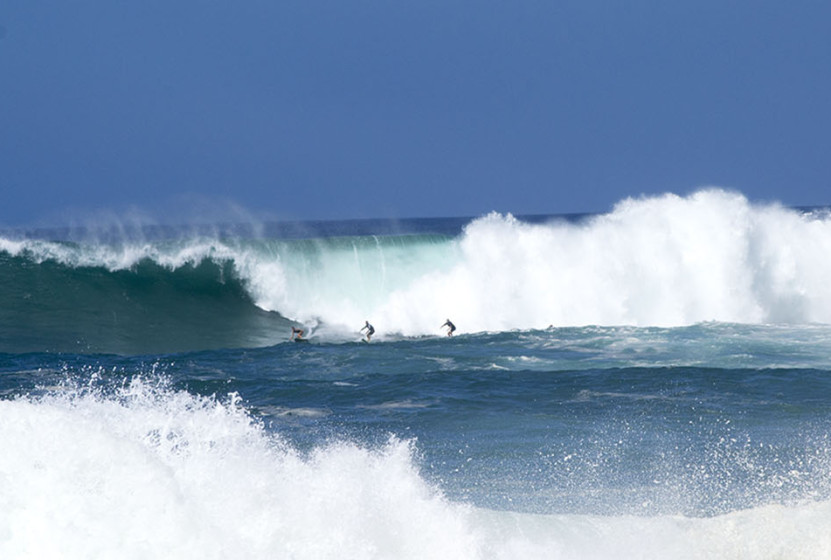 You would think that with weather warnings and alerts of hazardous surges occurring along North Shore Oahu that I would heed the advice and stay away from the surfing mecca of the world, but this actually had the opposite effect. I wanted nothing more than to go and see the 50 feet waves that were threatening Oahu’s North Shore. I wasn’t the only one with this idea as hundreds of people including local residents, tourists, and the media were itching to get a glimpse of the surfers fearless enough to venture out and catch some of the biggest waves (keep in mind that if you are heading to the North Shore when the waves are really big pack some food and water with you because you could be stuck in traffic for a while). 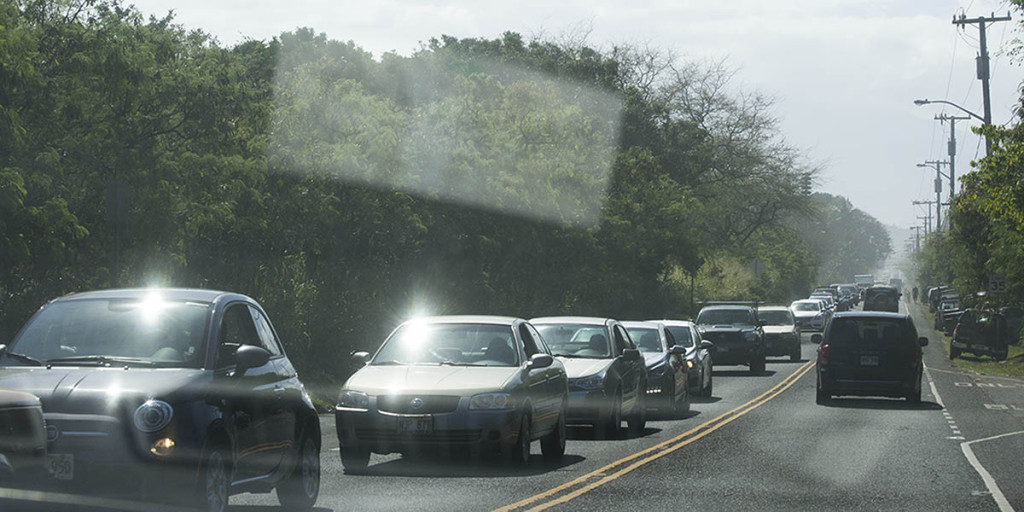 The traffic was bad all along the Kamehameha Highway. 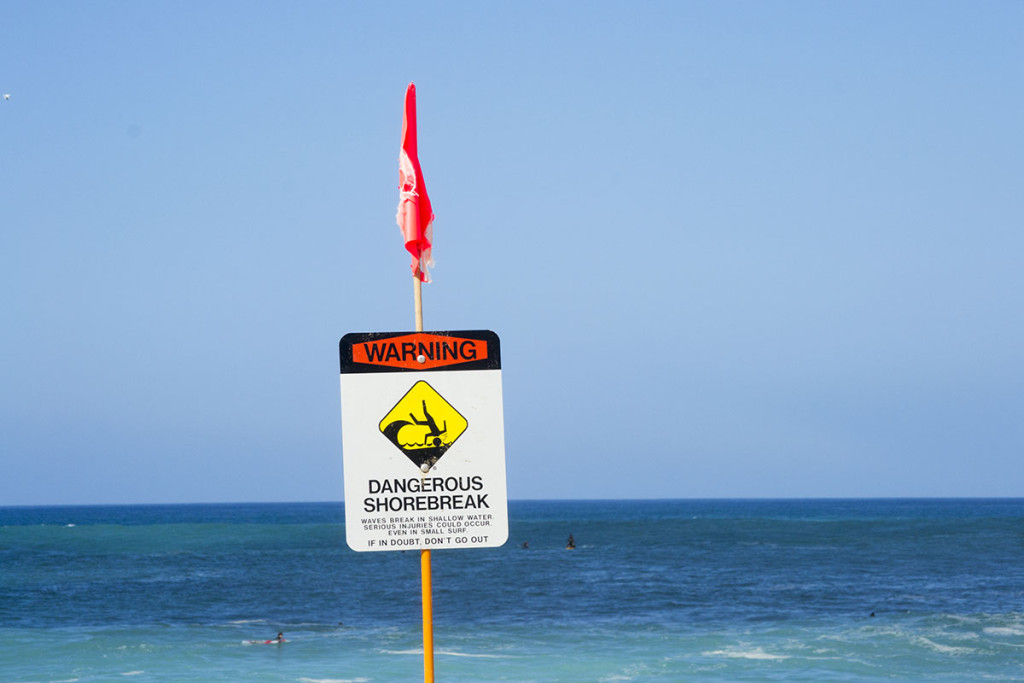 The waves were high enough that danger signs were necessary.

The waves, although breathtakingly beautiful from a safe distance on the shores of Waimea Bay, were extremely powerful and dangerous. At one point, the Honolulu Emergency Services Department and Lifeguards were concerned that the waves would reach heights high enough to wash out the parking lot at Waimea Bay Beach, which was about 50 feet from where Mike and I were sitting, so people had to move their cars and clear the area.

Watching the waves from a safe distance on the shores of Waimea Bay Beach. 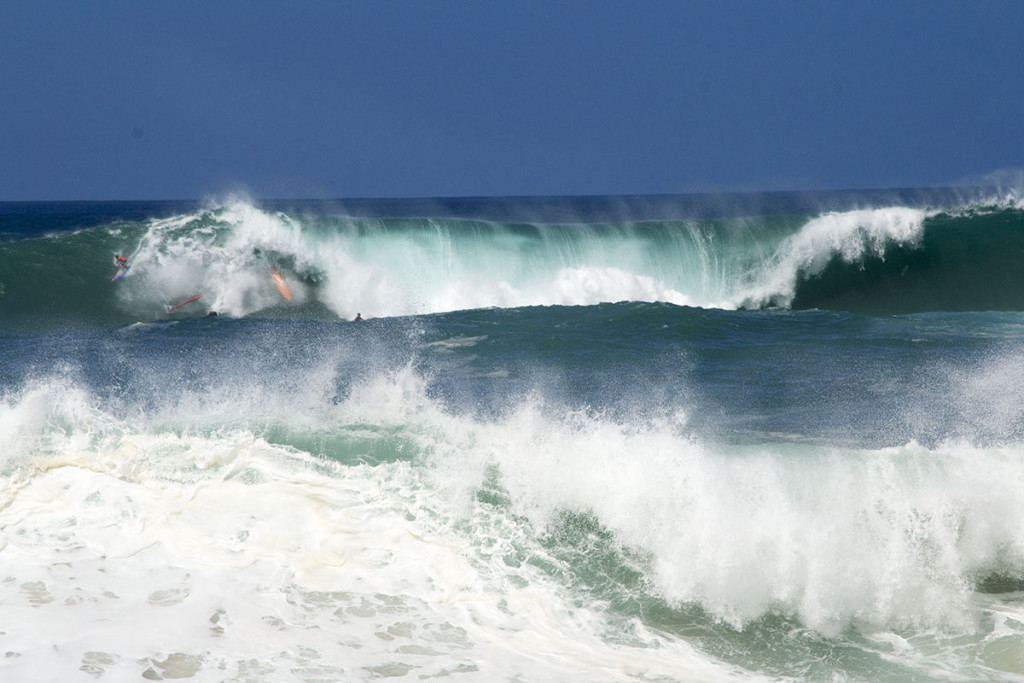 50 feet waves everyone was eager to get a glimpse of.

Listening to the lifeguards, most people started to get out of dodge but I caught up with two free surfers – Daniel Kfouri and Bruno Silva – who had absolutely no intention of vacating the area and wanted nothing more than to run towards the perilous surf brought on by the winter swell. 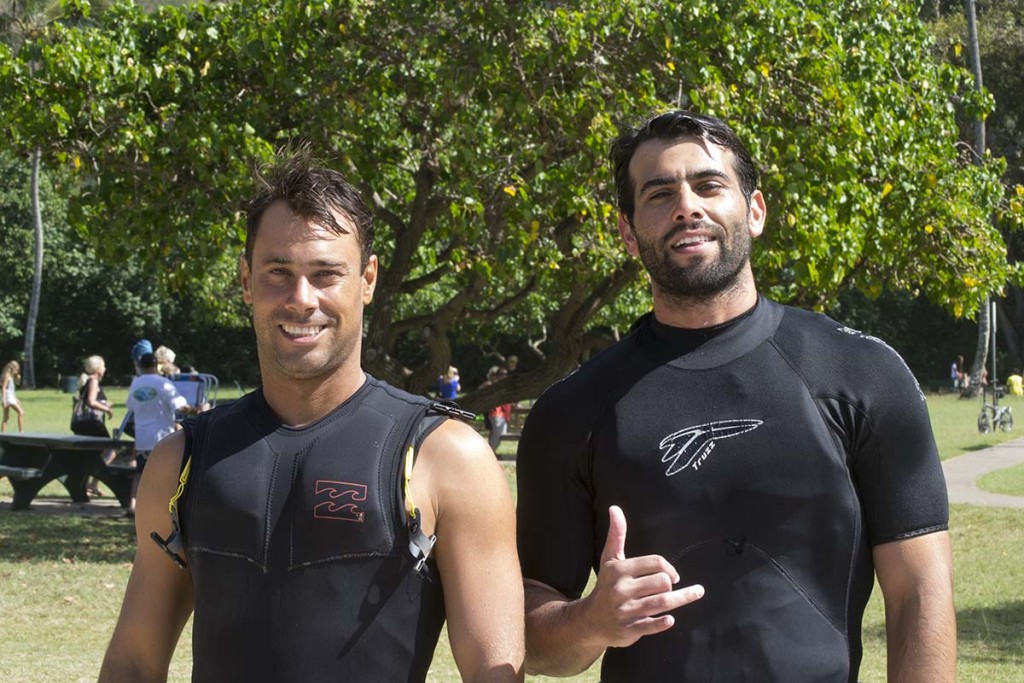 Daniel Kfouri, a free surfer and native of Brazil, has been surfing for 25 years and spends at least three months every year in Oahu to catch some of the world’s biggest waves. Daniel told me that the waves were between 50 to 80 feet high and were getting higher by the minute. There were several other surfers out on the water that day, making it difficult to catch a wave, but that did not deter him from continuing to try. 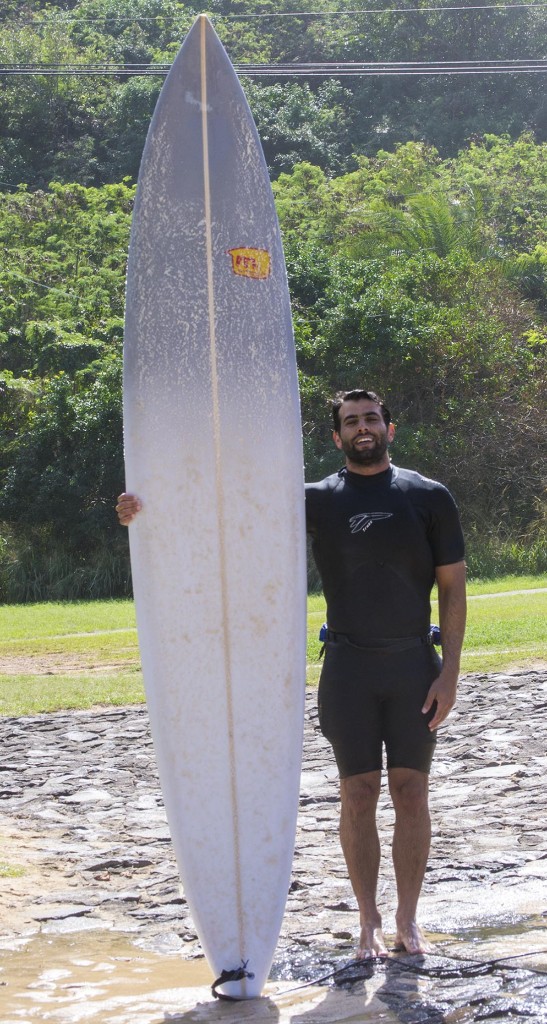 Daniel Kfouri and his surfboard.

Bruno Silva, originally from Brazil, was also at Waimea Bay determined to ride the waves. Bruno has been living in Hawaii for over 10 years and surfing for over 20 years. Below are some pictures of Bruno surfing at Waimea Bay and Pe’ahi Jaws. He makes surfing look so easy, but we know it is anything but! I guess the fact that Bruno is a surf coach and personal trainer at Turtle Bay Resort definitely helps. 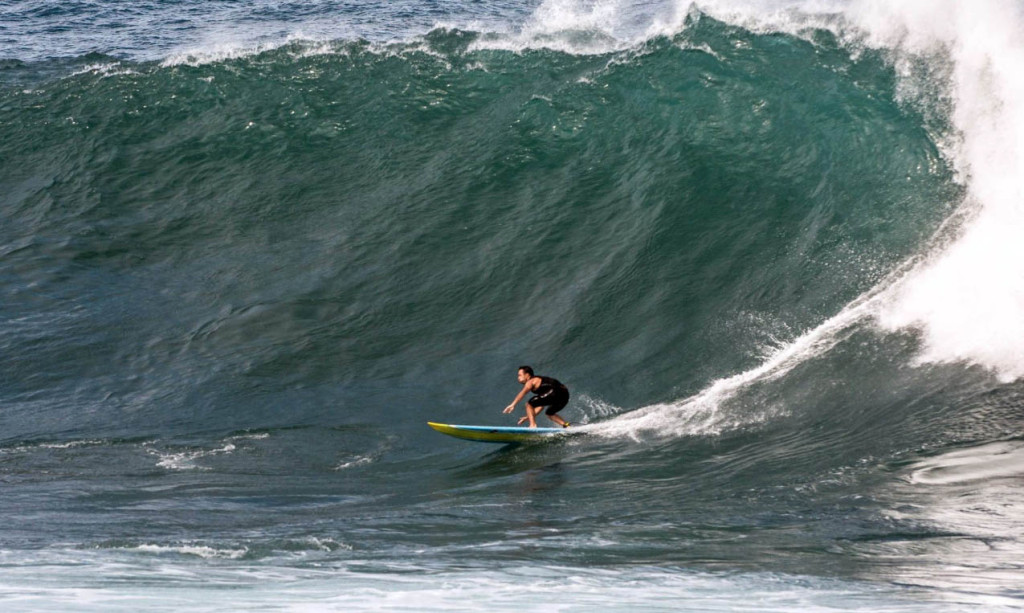 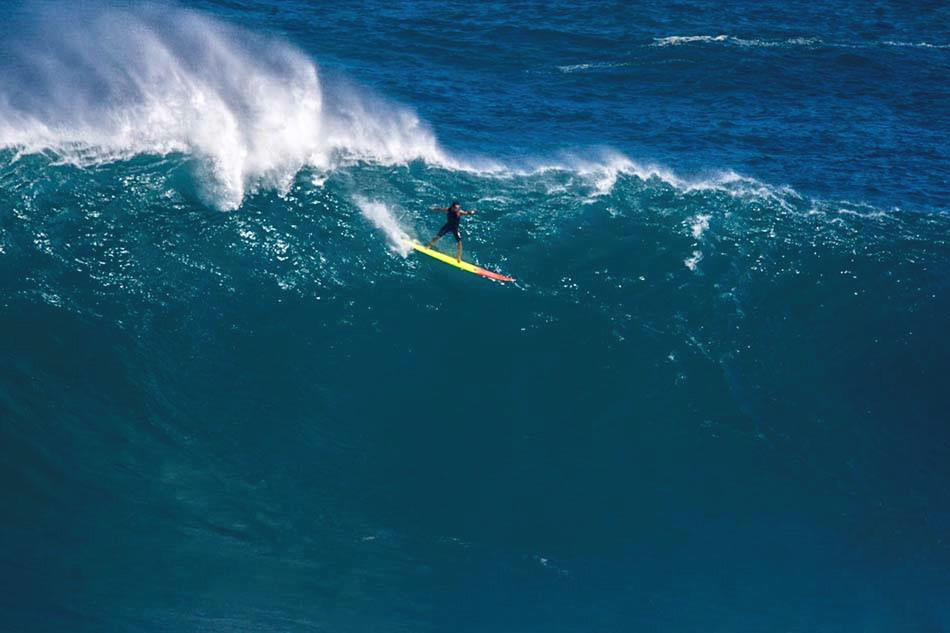 I have so much awe and respect for people who make something extremely difficult and scary look easy and fun. You definitely need to reach a level of strength, balance, and grace that I most certainly do not have.  Daniel told me that one of his scariest surfing moments was getting caught inside a big wave. I think there are a couple of steps that I would have to master first, like being able to get into the water without tripping over my surfboard. Not like I would want to do the Pamela Anderson run on Baywatch, but look at these boards – they are absolutely huge and I’m sure quite difficult to handle. They definitely don’t look like the ones that the Teen Choice Awards hand out.

Bruno Silva and his surfboards.

I asked Bruno to identify some important skills that a surfer should have to enjoy the waves (besides the obvious – learn to swim, which I know I still need to do). He told me that since the waves can reach over 40 feet, safety is always first and so it is important to learn how to hold your breath for 3 minutes and develop CPR and rescue skills. The latter skills are ones that you hope you never have to use, but there’s nothing wrong with having them in your arsenal just in case.

For those who are thinking of surfing for the first time, here are some points to consider:

be safe and enjoy the water!

Read more about my Hawaiian Adventures:

Going to Honolulu? Things To Do In Waikiki