Above image courtesy of See-ming Lee

I was able to knock two things off my bucket list this past September: going to NYC and attending the U.S. Tennis Open. My trip to New York was absolutely amazing, not only did I see one of the more epic matches in tennis history (Federer vs. Monfils), but I was also able to win tickets to a taping of the David Letterman Show (more on that later!).

The US Tennis Open in New York is the last grand slam of the year and is held at Flushing Meadows in Queens, New York. The tournament usually starts during the last week of August and finishes in September.   Tickets to the matches can be purchased through Ticketmaster in April (for USTA members) and in June (to the general public). Make sure you know which match you want to see because the tickets sell out fast and you can only buy tickets for one match at a time. Tickets to the tournament can be expensive and the cost depends on the matches that you see and where you sit.   If you make it to a match held in the Arthur Ashe Stadium, keep in mind that there really isn’t a bad seat anywhere so you don’t necessarily have to spend a lot of money to get a good view of the game.

Here’s a picture of the court from Row X of the Promenade. This is where I sat during the Men’s Finals between Cilic vs. Nishikori. I was able to see the players and tennis ball perfectly fine, and more importantly feel the crowd’s energy.

Even sitting all the way in the back, Mike and I still had a great view of the Men’s Final match.

To get from Manhattan to Flushing Meadows via Subway, catch the number 7 train from Grand Central Station or Times Square-42nd Street Broadway Station to the Mets-Willet Point Station. During rush hour there is an express train called the Train 7 Flushing Express and it is depicted with a diamond rather than a circle. From Times Square to Mets-Willet, the Flushing Express makes 10 stops as opposed to 20 stops with the Flushing Local Train. This was definitely a time saver for us!

Tickets to a match give you access to the grounds, so make sure you give yourself a lot of time to walk around. There is a lot to see, souvenirs to buy, and places to eat. It is great to just sit, take in the atmosphere and people watch. Also, the media are all over the grounds and the legendary John McEnroe has a booth, so go see who he is interviewing or listen to his commentary about the players and matches. 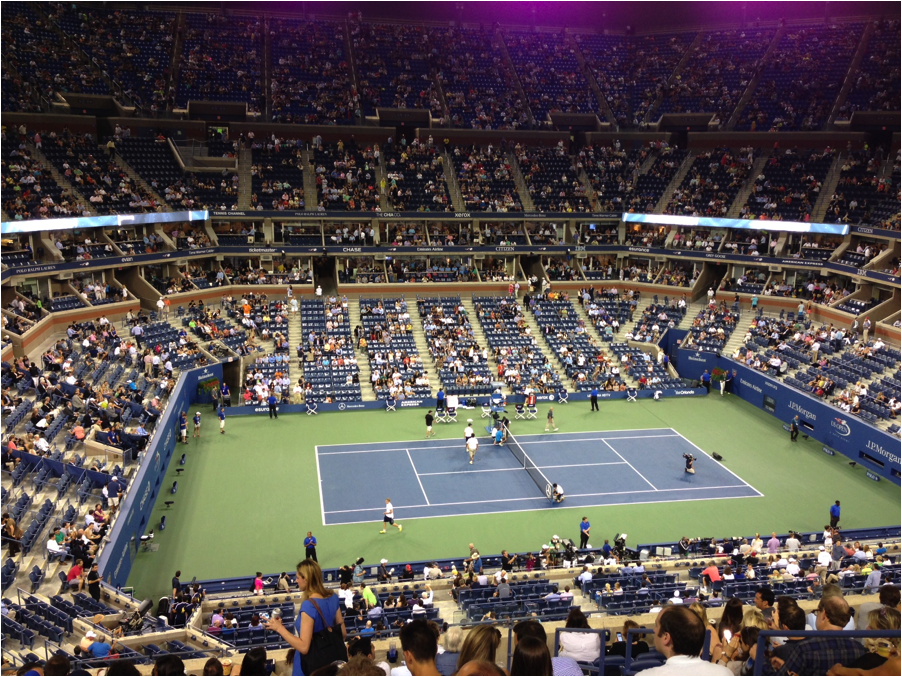 Everyone starting to get settled in before Federer and Monfils walk onto the court.

I was fortunate enough to get tickets to the Men’s Quarter Finals and the Men’s Finals. When I first purchased the tickets, I didn’t know who I would see but being at the game was exciting enough to me. Needless to say, I was blown away when I found out that I would be watching Roger Federer, who is my absolute favorite tennis player, play Gael Monfils. 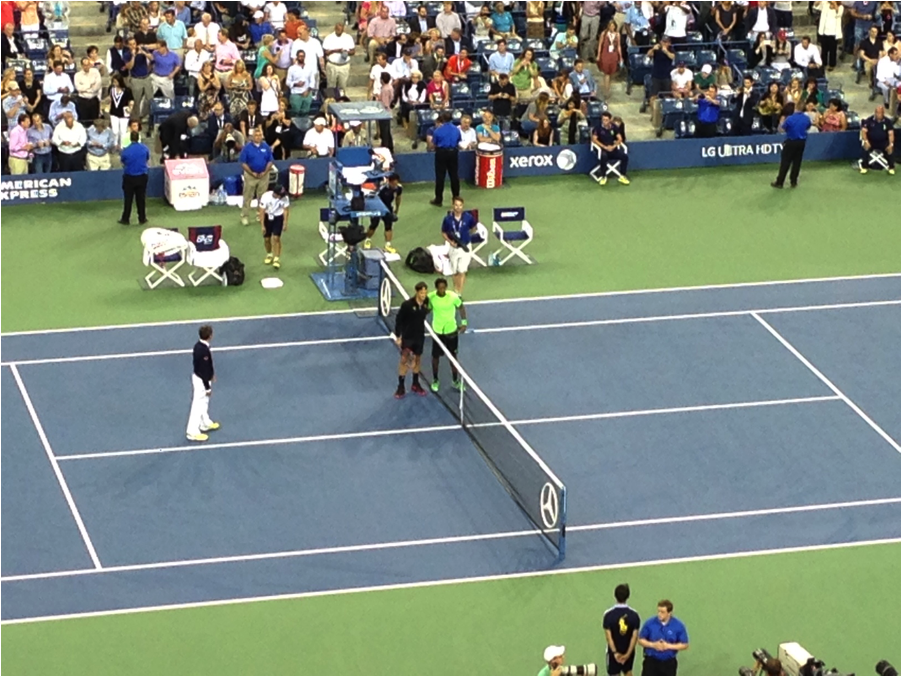 Federer and Monfils taking the obligatory photo before they begin the match.

Watching Federer on TV is always exciting but seeing him live on the court is magical. Not only is he the epitome of a gentleman who is gracious in both triumph and defeat, but he also moves gracefully making it seem effortless as he glides from one side of the court to the next. On top of that, I experienced LIVE one of the most epic matches in Grand Slam history!!! Monfils won the first two sets at 6-4 and 6-3. Federer was able to win the third set at 6-4, but during the fourth set he faced two champion points and I thought this is it, game over. However, Monfils failed to convert the points and being the true champion that he is, Federer came back and won the set and ultimately the match – and that ladies and gentlemen is why Federer is holds the record for Grand Slam titles! The energy in the stadium was electrifying and everyone stayed till Federer walked off the court. I couldn’t have asked for anything more, well except a final game between Federer vs. Djokovic. Unfortunately that didn’t happen in 2014 because they both lost in the semi-finals.

During the Men’s Final game Marin Cilic went up against Kei Nishikori. This match up was one of the most unexpected in Grand Slam history. Although Nishikori’s career trajectory had been trending upward and even with seven ATP titles under his belt, few people expected him to beat Djokovic in the semi-finals, but I guess everyone loves an underdog! It was exciting to go to the final match because nobody knew what to expect and we all just wanted to watch some great tennis. In another unexpected surprise during the final match, Cilic beat Nishikori in three straight sets – 6-3, 6-3, 6-3, to capture his first Grand Slam title. 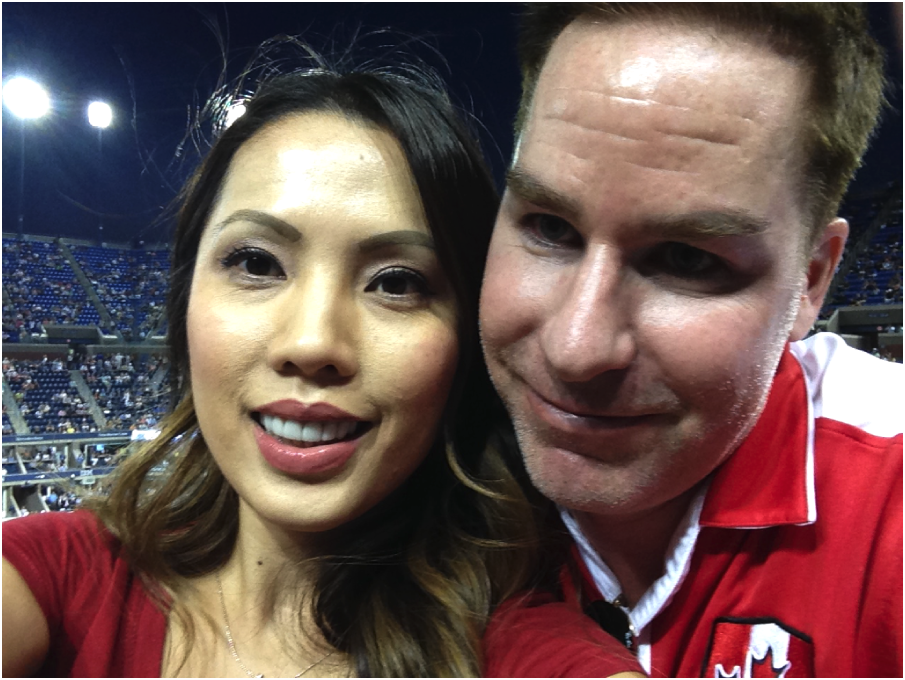 Mike and I capturing our own moment in tennis history J.

The players and match ups do add to the excitement, but regardless of who is playing on the court or if you are new to tennis or a long time fan, the US Tennis Open is definitely a tournament that you must experience.